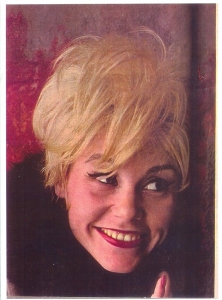 Broadway composer-producer Richard Rodgers was trying to find a French girl who could sing, dance and do comedy for a role in his hit Broadway musical "No Strings."

He tuned in to Johnny Carson one night and - voila! - there was Yvonne Constant, a pretty little French Gamin who sang pleasantly, talked charmingly, and matched Carson line for line in the comedy department.

The next morning Rodgers called her in for an audition and signed her.