Yvonne Constant - Aznavour As Is 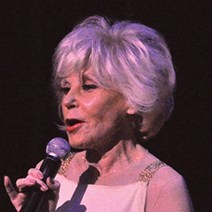 Two of France’s most talented musical exports were brought together onstage at Don’t Tell Mama as Yvonne Constant paid tribute to the late songwriter/performer, Charles Aznavour.

Music director/pianist Russ Kassoff, alone on stage, led off with an overture based of Aznavour’s songs. Lights down, the room’s door opened, and the ever-glamorous Constant swept in, settling on a stage stool.

Even if you did not know French, you couldn’t help but enjoy her warmth, spirit, and humor as she performed a variety of Aznavour’s songs. Among them were “Emmenez Moi,” “For Me Formidable” (by Aznavour and Jacques Plante), and the humorous “You’ve Let Yourself Go,” with English lyrics by Broadway’s Fred Ebb.

Kassoff took over the spotlight briefly, chatting about his own early experiences accompanying Aznavour and playing and singing several of his songs, including “Yesterday When I Was Young,” “The Sound of Your Name,” “It Will Be My Day,” and “Mon Amour.”

Constant resumed with “Que c’est triste Venise” (“Venice Blue”), “Et Pourtant” (“Yet I Know”), and “La Bohème,” all with music by Aznavour and lyrics by various writers.  Her program also included several non-Aznavour selections, including the Piaf favorite, “Non je ne regrette rien.” She completed the evening with “Hier Encore” (“Yesterday When I Was Young”), its music and French lyrics by Aznavour and English lyrics by Herbert Kretzmer. She finished with a flourish with “La Temp” (“There Is a Time”) with music and French lyrics by Aznavour.

Yvonne Constant recently relocated to her native France, but she has continued to bring her style, her charm, her understated humor, and her authenticity back to the New York cabaret stage. It’s a cause for rejoicing.