La Différence at the Metropolitan Room 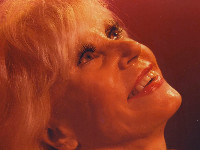 For women, reaching that certain age is less of a bugaboo these days, with vibrant entertainment idols as Marilyn Maye, Elaine Stritch, Julie Wilson, Barbara Cook and Barbara Carroll still drawing significant public interest. You can add to these gals Yvonne Constant, who came to Broadway in La Plume de Ma Tante in 1958, won a Tony Award, and now presents her sixth show, "La Différence," at the Metropolitan Room.

Wearing a teeny mini of white silk with pale, shimmery stockings over a body suit, this Gallic gamine is tough, sophisticated and glamorous as she expresses the differences between English and French interpretations of familiar songs. In her free-wheeling show of parlando, cynical viewpoints and affectionately snide asides at her musical director and pianist, Russ Kassoff, Constant proves to be a woman of confident, piquant charm. Her husky vocals and sly anecdotes point out how the French and Americans are a sea apart in their views of life, love and sex.

Take the example of the wife of French President François Mitterrand, who invited her late husband's long-time mistress and family to stand beside her at his funeral. In contrast, Hillary Clinton was castigated for not leaving her husband, President Clinton, when he was forced to apologize publicly for a sexual indiscretion. This would never happen in France. This is "la différence," Constant says, adding, "…or indifference."

The point is illustrated through the disparities in the French and English lyrics to chansons like Charles Trenet's "La Mer." In French, with lyrics by Trenet and Léo Chauliac, the song is an ode to the sea, a "shepherdess of azure." In English, it becomes, "Beyond the Sea," a love song with lyrics by Jack Lawrence, where "she's waiting there for me." Constant chooses to sing only the French version. She was not an early fan of Trenet, thinking him an eccentric lightweight; today, however, she appreciates his enthusiasm, and delivers his "Boum" and a buoyant, quirky "Je Chante!"

From Gilbert Bécaud, a man so energetic onstage that he was called "Mr. 100,000 volts," Constant delivers two songs turned into American melodramatic ballads. A popular weeper for Vikki Carr, "It Must Be Him" (English lyric by Mack David) tells of a woman waiting by the phone, desperately hoping that he will call. Bécaud's rendition of the song, with its original title "Seul Sur Son Étoile" (alone on his star) and a French lyric by Maurice Vidalin, is more meditative. Bécaud's wrist-slasher, "Et Maintenant" (lyric by Pierre Delanoë), is less subtle in English as "What Now My Love" (lyric by Carl Sigman). The two versions show a difference of perspective.

Notable is "Comme d'Habitude" (music by Claude François and Jacques Revaux, lyric by Claude François and Gilles Thibaut), which became a trademark tune for Frank Sinatra after Paul Anka wrote his translation, "My Way." Anka's way wandered far away from the French version, which portrays an empty relationship left with only old habits. "My Way" is a pretentious, congratulatory anthem to oneself. Constant sings a more literal translation of the French lyrics.

Constant, whose career in ballet and theatre has included the Encores! production of Follies in 2007, reprises Stephen Sondheim's "Ah, Paris," from her performance as Solange. From La Plume de Ma Tante, she recalls the catchy tune that became a favorite for Jimmy Durante, "One of Those Songs" (Gérard Calvi, English lyric by Will Holt).

Not all French/English versions were miles apart in their intent. With sensitivity, Constant conveys the regret and loss of "Mon Vieux" (music by Jean Ferrat, lyrics by Daniel Guichard and Michelle Fricault). Her English version, "My Dad," with lyrics by Herbert Hartig, has a similar sense of sorrow and subdued affection.

Despite the hurly-burly confusion of much of her opening night, Constant is fun to watch and compelling to hear. Vive "la différence" that Yvonne Constant, a chanteuse for today, gives to her shows.