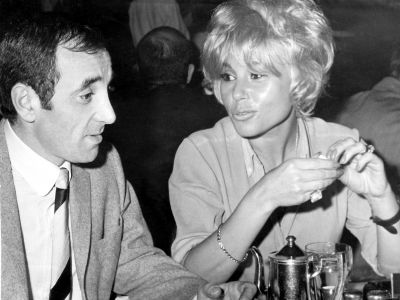 Renowned singer, lyricist, actor and French icon Charles Aznavour died in France in October, 2018 at the age of 94, but after the initial obituaries, he was not properly honored in the New York cabaret world. Chanteuse Yvonne Constant has stepped into the breach at Don’t Tell Mama with her affectionate tribute titled “Aznavour as is. ” Two performances have already occurred on January 17th and 25th, and there is another that one can still catch at 7 p.m. on January 31st.

Joining in the program dedicated to the Aznavour is Russ Kassoff, Constant’s pianist and musical director, with whom she has had a working relationship over many years. There is a logical connection in the show, as Constant knew and admired Aznavour, who was championed by her as he worked to achieve his illustrious career. The tone of the performance is primarily intimate and chatty, with information dispensed along with the music.

In the course of remarks Constant makes, she recalls how Johnny Carson, who repeatedly booked Constant on his show in the years after she performed on Broadway in “La Plume de Ma Tante,” didn’t know who Aznavour was when he visited the U.S. and asked Constant about him. She responded with a briefing and recommendation.

As for Kassoff, he had occasion to work with Aznavour, as reflected in a projected photograph. He was a pianist and musical director for Aznavour on various occasions, the last in 1999 at the opening of the Hotel Paris Las Vegas when he conducted and played for Aznavour, with accompaniment by Michel Legrand and a full orchestra. Kassoff gets a spot in the program to talk about Aznavour, emphasized with playing different numbers on different nights.

Constant begins her tribute with an array of images reflecting Aznavour’s extraordinary life and career. He has been credited with writing more than 1200 songs, and recording more than 1000. Her program highlights numbers in some way associated with him, both in French and English. She does this in an informal manner, and on the night I attended (January. 25) let the capacity audience in on the cabaret notables attending, introducing KT Sullivan, Mark Nadler, Steve Ross and Richard Holbrook.

Constant selects and sings numerous songs for which Aznavour wrote music or lyrics or both. Her opening number is “Emmenez Moi” (music and lyrics by Aznavour). She also sings “You’ve Let Yourself Go” (Music by Aznavour, English lyrics by Fred Ebb). She puts special feeling into “Que C’est triste venise” (music by Aznavour), lyrics by Francoise Durin).

Constant is best when she sings with force, as with “La Boheme” (music by Aznavour, lyrics by Jacques Plante), and with her encore number, “Yesterday When I Was Young” (music and French lyrics by Aznavour, English lyrics by Herbert Kretzmer).

Although the emphasis is on Aznavour’s work, it was deemed fitting for Constant to sing a few non-Aznavour numbers to further capture the spirit of French hits known to international audiences. In that spirit, Constant sings “Non, je ne regrette rien” and “Milord,” both associated with Edith Piaf. At Don’t Tell Mama, 343 West 46th Street. Phone: 212-575-0788. Reviewed January 27, 2019.