I don’t expect to ever see a production of “Follies” as incandescent as the concert version staging (February 8-12, 2007) that opened this City Center Encores! season commemorating the 100th anniversary of the first "Ziegfeld Follies.”

A phenomenal cast triumphed in one number after another and brought a new level of poignancy to a reunion of show people in which the raw nerves in lives marked by faded hopes for personal happiness are exposed.

All of the casting had the mark of perfection. For the French show business veteran Solange, there was the genuine article—the French chanteuse Yvonne Constant, who zestfully sang “Ah, Paris!,” an amusing ode to the great city. She looked great and added zing to that section of the show.

Isn’t it possible to move this coup to Broadway as was done with “Chicago?” Reviewed at New York City Center.
wolfentertainmentguide.com William Wolf

"Not all the songs were so well served . . . But Yvonne Constant as Solange LaFitte was dryly hilarious, singing 'Ah, Paris!'"
The Journal News Jacque E. Sourd

"Musical highs are too many to mention, but among the featured players, Yvonne Constant nails the laughs and the clever lyrics of "Ah, Paris!" with clarity."
variety.com David Rooney

"The director beautifully showcases the older performers, too: from Anne Rogers and Robert E. Fitch as a dancing duo to Yvonne Constant as a most Gallic chanteuse to the show-stopping Mimi Hines who takes the raucous "Broadway Baby" and hilariously makes it her own."
Associated Press Michael Kuchwara

"Mimi Hines, a vocal powerhouse who replaced Barbra Streisand in 'Funny Girl'; Jo Anne Worley, the most flamboyant of the madcap comics on the satiric tv series 'Laugh-In'; Yvonne Constant, the French cabaret artist who won a Tony for 'La Plume de Ma Tante' - they're all on hand as former Weismann girls.

And they are all remarkably good, without turning their numbers into occasions for personal grandstanding."
The New York Times Ben Brantley

"But there is outstanding work from Mimi Hines, JoAnne Worley and Yvonne Constant."
Bloomberg.com John Simon 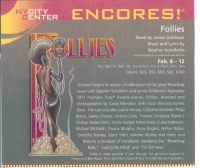 Each song was greeted rapturously by the Saturday matinee audience, but none more so that the triple duet of Anne Rogers and Robert E. Firth’s “Rain on the Roof,” Yvonne Constant’s “Ah Paris!” and Mimi Hines’ “Broadway Baby.”
Theater Scene.net Victor Gluck

"And these gals are all showstoppers: (in no order of importance): Christine Baranski, Joanne Worley, Yvonne Constant and Mimi Hines."
hellskitchennyc.blogspot.com Todd HellsKitchen