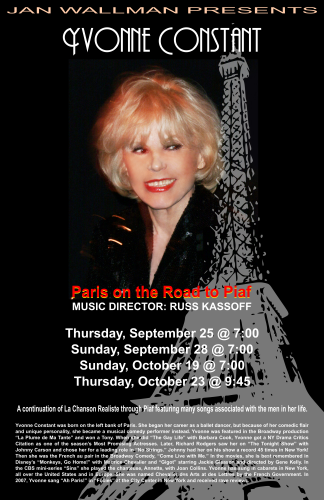 Paris on the Road to Piaf

A continuation of La Chanson Realiste through Piaf featuring many songs associated with the men in her life.

Yvonne Constant was born on the left bank of Paris. She began her career as a ballet dancer, but because of her comedic flair and unique personality, she became a musical comedy performer instead. Yvonne was featured in the Broadway production “La Plume de Ma Tante” and won a Tony. When she did “The Gay Life” with Barbara Cook, Yvonne got a NY Drama Critics Citation as one of the season’s Most Promising Actresses. Later, Richard Rodgers saw her on “The Tonight Show” with Johnny Carson and chose her for a leading role in “No Strings.” Johnny had her on his show a record 45 times in New York! Then she was the French au pair in the Broadway Comedy, “Come Live with Me.” In the movies, she is best remembered in Disney’s “Monkeys, Go Home!” with Maurice Chevalier and “Gigot” starring Jackie Gleason and directed by Gene Kelly. In the CBS mini-series “Sins” she played the chanteuse, Annette, with Joan Collins. Yvonne has sung in cabarets in New York, all over the United States and in Europe. She was named Chevalier des Arts at des Lettres by the French Government. In 2007, Yvonne sang “Ah Paris!” in “Follies” at the City Center in New York and received rave reviews.